What are Amani Institute alumni up to? In this series we are looking at different projects our alumni are pursuing to show the diversity of what Social Innovation can mean. This story is written by Maria Garrigues, Amani Fellow 2014. Pictures courtesy to Santiago del Guidice, Amani Fellow 2014.

Video Voice is an approach intended to reflect a critical situation through the eyes of the people who experience it. Based on Paulo Freire’s philosophy it also looks at leading processes of critical thinking in the community through the viewing the materials which are produced.

Inspired by this approach, a team constituted by Caco, movie director (the inspiration), Ivan, educational entrepreneur (the heart), Tato, social innovator (the semi-kenyan), Bruno, future sociologist (the sensitivity), and Maria, psychologist (myself), decided to take 9 video cameras to Mukuru Kwa Reuben Slum, Nairobi, Kenya, to see what would come out of it.

Specifically, we approached a School, Gatoto Primary School, we asked them to select 18 students, ages 7 to 15, to participate in this proposal during 4 days.

The question we were asking was “What will a group of children, who are given a camera for the first time in their life, produce when asked to narrate their lives?”

The following lines are a combination of the first approach to explain to the children what a camera is, and a short descriptions of some of the images which were produced by the children by the end of the process.

“So the camera is like other eye …” commented Caco, a well known Brazilian actor and movie director. He was talking to the 18 kids who are taking part in a video project at Gatoto Primary School, in Mkuru Kwa Reuben Slum, who were exposed to a camera for the first time. They are going to be recording their day to day lives in the next few days.­

From then on, he spoke in Portuguese, Tato, Argentinean social innovator whose passion has to do with changing the way we approach people with disability, translated. I have to say, Tato is Argentinean, but almost Kenyan. 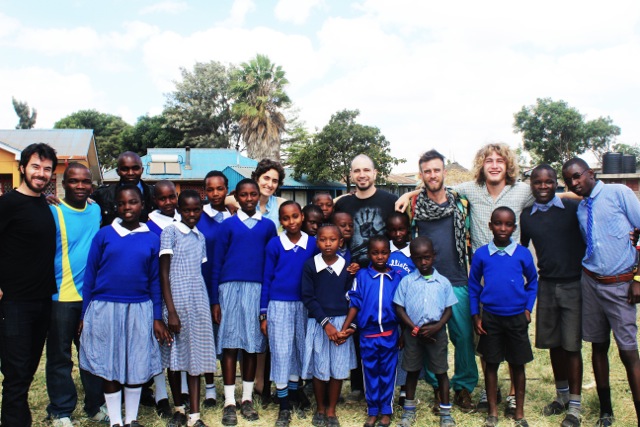 “So, the Camera. Let’s imagine that this is an eye. You see that it’s round, like our eyes, ndio (“yes” in Kiswahili, the local language)?” Tato translated.

“And everything that we record, is what this eye is watching, sawa?

…The first scenes Diana, the smallest student, recorded where moving, the camera flashed form one corner of the street to the other, she recorded tables, feet, the sky. She was recording the street she was walking through. She was recording the movement, and following her curious, restless eyes, she was able to take us through that buoyant street of Mkuru Kwa. We were able to feel the abundance of stimulus, the incredible amount of activities that where taking place, and to feel restless, as we were walking down the street.

“And the camera also has a small brain, like our brain, which serves almost exactly like the brain does.” Caco continued.

One of the student understood where we were getting to.

“Yes! It has a memory, like our memory, now, that’s called a memory card. Yes!”

Caco continued explaining, he was pronouncing words, but his expression went much further than his words. And Tato continued translating.

“So this brain is the one that stores all the images inside here, and then you can put that memory into a computer, when you put it in a computer, or in a –somewhere, we can watch it, ndio?”

…Irene has the curiosity and heart of a reporter. She interviewed her artistically genius 12 year old brother. It was aw inspiring for us to find out that in Mkuru Kwa Reuben Slum, in the midst of one of the biggest settlements of timber walls and streets made of accumulation of plastic waste and mud, there lives a boy, who is barely 12 years old, but who paints rivers and forests he has never seen, any adult painter would be envious of. Our young reporter, Irene, asks “And you have been described as one of the greatest artist in your class…”, followed by “Do you really know that you can change the world?”. Do you really know that you can change the world? What a question. Her interview was combination of questions and a moral speech, as she was interviewing she was also talking about humbleness, commitment to the community, and responsibility towards one’s own talent.

…Lia showed us her mother. “My mother, this is my mother” were her words, as we could see her mother’s big brown eyes fill the screen.  Impact is the word that comes to my hands as I write this. It would have been difficult to accomplish a better description of motherhood than Lia’s.

“So, the question is, if you already have two eyes, why do you need another one?” 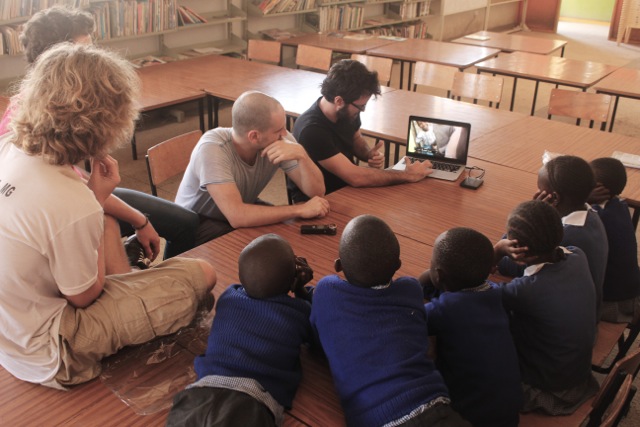 That is definitely the question.

….We saw night blankets, colorful patterned garments, brown trousers, balancing in the wind. We saw it close up, mixed with patted dust surfaces form the back yard flood of William’s house and a cock. We saw it all as we had never seen it before. The new eye had granted William a new look, that was able to perceive beauty in the ordinary, as a laundry line is a common suit in Williams’s house, but it had never balanced so gracefully, it had never been able to hold so much beauty.

“Because …. If I want to show some friends of mine what I have seen in Kenya, my friends in Argentina and Brazil, with this camera we can show them.”

“I cannot open my brain and show them, but with this camera we can show the way we saw it.” Tato explained further.

“It’s ­like you can pick a little part of your brain, of your memory, and you can share it with your friend.”

…Peter is taping Mura, she is a hear saloninst, she is bradding Lidia’s hair. Suddenly he changes the perspective of the camera, he turns around and starts recording the adjacent field, there is people, buildings, and at the far end, almost imperceptible, there is a little boy, a young boy playing with a wheel, making a wheel turn in front of him. The camera focuses on this boy, as he starts to run. We can perceive him in the distance, he is still small to our eye, and we accompany him on his journey. He is running to the side, across the frame. Now he is coming our way, he is getting bigger every instant, and we are with him, until he is so close we can almost touch him. The image is strong, perfect in every sense, and for one instance, there is nothing more than that wheel, that boy.­

…We saw Michael singing “this is our world” through Mats third eye. The image had been unintentionally overexposed, and the scene was almost entirely white. However this turned out to be a beautiful effect, almost angelical, as a beautiful boy, Michael, with a huge smile, was singing a world changing song through a whitened screen.

“But we cannot show them.”

“For them to see we need a camera.”