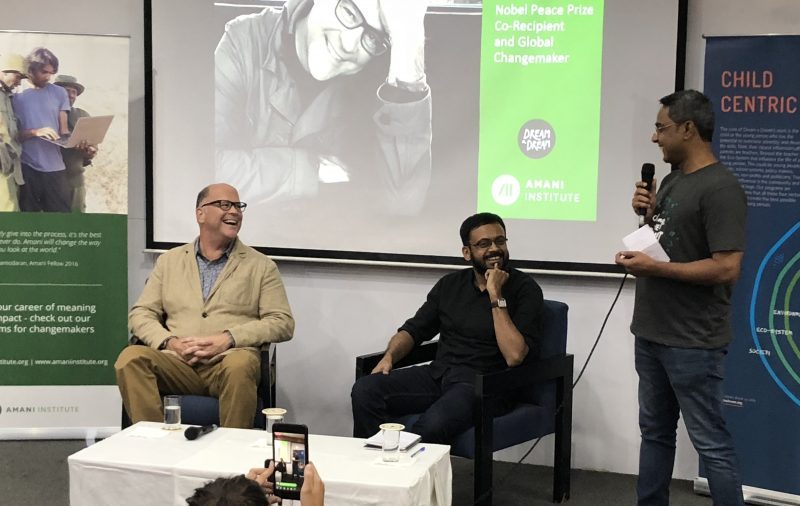 “Changemakers are people who can see the patterns around them, identify the problems in any situation, figure out ways to solve the problem, organize fluid teams, lead collective action and then continually adapt as situations change.” – Bill Drayton, Founder of Ashoka

Like Ashoka, Amani Institute also believes that ‘everyone can be a changemaker’. And our long relationship with Ashoka is a testament to that shared value set. In fact, Amani was co-founded by two long-term Ashoka staffers, Ilaina Rabbat and Roshan Paul, who spent a combined 17 years at Ashoka before starting Amani.

“This history inevitably translated into many mental models and ways of working at Amani”, says Ilaina Rabbat. “We complement each other”, adds Roshan Paul, “because Ashoka seeks to build the broader ecosystem and architecture for an ‘everyone a changemaker’ world and Amani trains people to actually be changemakers on the ground.”

This complementarity enables a strong partnership. For instance, when Ashoka U was looking for a partner to help develop changemaking skills for the staff at Miami Dade University, the largest university in the USA, they turned to Amani to design and run a training program for Miami Dade staff members and faculty. Ashoka has also contracted Amani on other occasions, particularly in Kenya, to run programs for Ashoka Fellows.

Ashoka has also benefited from hosting Amani Fellows through Amani’s apprenticeship program. An outstanding example of this is the experience of Amani Fellow, Jing Irene Wu, who was hired by Ashoka in Washington, DC, after completing her apprenticeship with Ashoka in Bangalore, India. Irene says, “A lot of Amani’s content is related to what Ashoka believes, but it goes further too. Some of the most useful things that I have been able to apply have been related to inner work. It’s been really helpful to manage my own reactions to situations and to analyze when I’m letting my own ego get in the way, when I should just speak up, or when I should let it go.”

Like Irene, 16 Amani Fellows from 13 different countries have completed apprenticeships at Ashoka across our India, Kenya, and Brazil campuses over the last six years. Of these, Suhasini Sharma, Gunjan Talreja, and HyeMi Ahn, were published in Ashoka India’s recent health mapping report. Ashoka’s Venture and Fellowship Manager in Bangalore, Shantanu Paul, says “Ashoka has partnered with Amani Institute to source high potential talent since the program kicked off in India. The Amani Fellows we have been lucky enough to host have brought an eagerness to learn, a readiness to contribute, and a wealth of life experiences that continue to leave our staff and network inspired.” In turn, the Amani Fellows too have been deeply inspired by Ashoka’s work and mentorship of them.  And Irene is not the only Amani Fellow to work at Ashoka. Others include Fernando Balbino who serves as a Changemakers Platform Manager in São Paulo and Santiago Del Giudice, a Globalizer Associate in Nairobi.

Beyond staff support, Ashoka’s incredible global network of social entrepreneurs also contributes to Amani in a number of ways. On Amani’s global Advisory Council are Ashoka Senior Fellows Jerry White, Co-Founder of Landmine Survivors Network, one of the architects of the 1997 Nobel Peace Prize-winning International Campaign to Ban Landmines, and Andreas Heinecke, Founder and CEO of Dialogue Social Enterprise GmbH, both of whom have been among the most popular guest speakers at Amani classes. On Amani’s Board of Directors from the start has been former Ashoka staffer Erin Boyd, co-Founder of Ashoka U. But the advisory relationship also goes both ways. Amani Fellow (and now staffer) Francesca Folda is an advisory board member of Ashoka Italy.

At Amani Institute, we are grateful for the continued inspiration, partnership, and support Ashoka provides us globally.