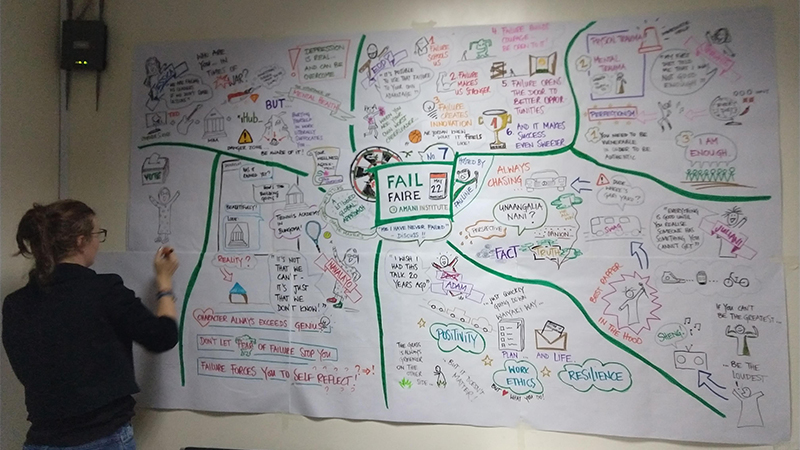 If you ask someone, or even Google about Thomas Edison, the first obvious answer will showcase all the inventions he developed – ranging from power generation to motion pictures. This is how we define great inventors and innovators  – by their achievements. But have you ever wondered how these great achievers define themselves? If you Google many of the quotes attributed to Edison, you will notice that almost none of them describes the moment of achievement, the feelings at that moment or even the achievement itself. They are mostly about THE PROCESS OF ACHIEVING – a process that involves perspiration, discouragement, doubts and failure – but never giving up! Innovators define themselves by how well they rise after falling and failing.

Jessica Colaço is an entrepreneur and TED fellow born and based in Nairobi, Kenya. She co-founded Brave Venture Labs  in 2015 and was also co-founded i-Hub in 2010 with Erik Hersman. She is a bass guitarist with rock and metal band A.S.I.A – Always Summer In Africa.

Navalayo was one of the first people to enrol in Amani Institute’s prototype course in 2013. A huge sports fan, Navalayo  has developed a sportswear brand, ENDA, channeling kenya’s prowess in athletics as inspiration.

A common theme for the speakers was the fact that failure is not the end but rather a means to the end. Through failure, we get to filter out between the impractical ideas and optimal solutions to help transform society. Resilience was also a key attribute that was referenced by the speakers. What do you do when the effects of failure affect your motivation and resolve?  How do you bounce back when in the doldrums after a major setback? There is an Aaliyah song with the line

In a world in which everyone is striving for excellence, we tend to forget that excellence is never an accident. It is a process that has peaks and valleys. For us as changemakers, our life journey is very similar to that of the 20th Century inventors. It is a journey filled with moments of confusion, disappointment, and failure. No one said that our journey in changing the world is easy and straight! Our thirst, passion and excitement to improve the harsh realities of the world, may fade by all the challenges faced along the process! We might lose motivation, hope and faith. Most of the times, when we fail, we tend to think how others perceive us, rather then how we perceive ourselves, and hence we start comparing ourselves by those who succeeded.  We need to embrace failure and use all our shortcomings to learn and better ourselves for the future.

Navalayo Osembo, one of the speakers summed the event up best with this quote, “Failure is just one less thing to do.”