This blog post was written by Aditi Agrawal, a participant in our 2014 class of the Certificate in Social Innovation Management. Here, she shares reflections on an experience with a guest speaker in one of our classes.

Andreas Heinecke encompasses a paradox in his being; his fathers’ family supported the Nazi regime while his mother’s family were victims of the holocaust. He realized that he belonged to both the “oppressor” and the “victimized”. This realization led him to question the process of why, how and what we categorize, and marginalize. He questioned the judgements we make on a daily basis, and opened them wide for enquiry. His search for answers was the start of his quest for tolerance, open dialogue and exchange.

One day he was given an assignment to manage a blind person. He realized that he was approaching the person from a stance of pity, which was absolutely misplaced. He realized that while non-blind people experience a visual overkill – over 60,000 thoughts are triggered because of our vision everyday – blind people are, simply put, much less distracted. They cannot afford to be distracted. Since then, Heinecke hasn’t looked back. He is on a mission to ensure that we bridge the barriers between the “disabled” and the “abled.” He believes that essentially everyone is a mix of both and that understanding what you can learn from your “other,” is truly the first step towards mindfulness.

He started building platforms, where the “disabled” lead the “abled.” This idea gave birth to Dialogue in the Dark, Dialogue with Time and Dialogue in Silence; led by blind people, by older people and by mute people respectively. These platforms have enabled people without these disabilities to truly understand the “other,” but more importantly also to develop their own hidden potential. When asked about the impact of these platforms, Heinecke mentioned that some of the visitors were called after 5 years and asked some basic questions about the exhibitions. The visitors were able to recall most of the details, especially the name of their guide. They found the entire experience to be very humbling.

Heinecke mentions that it is crucial to shift the paradigms that weigh down the human race. By changing the lens through which he viewed blind people, he was able to empathize and develop; he was also able to create a new market and bring about disruptive innovation. He emphasized the need to reframe and set indicators using which you should measure the impact of your work. None of these indicators need to be typical, but can be innovatively designed to align with your/your company’s values.

We, a group of students at the Amani Institute, were lucky enough to listen to Andreas speak. He had also asked us to bring pictures of the “Unseen” and below I am sharing one of the pictures, found on Google Image Search, by my classmate Bianca Monti. She said, that everyone sees the majestic elephants but few of us notice the path they tread. 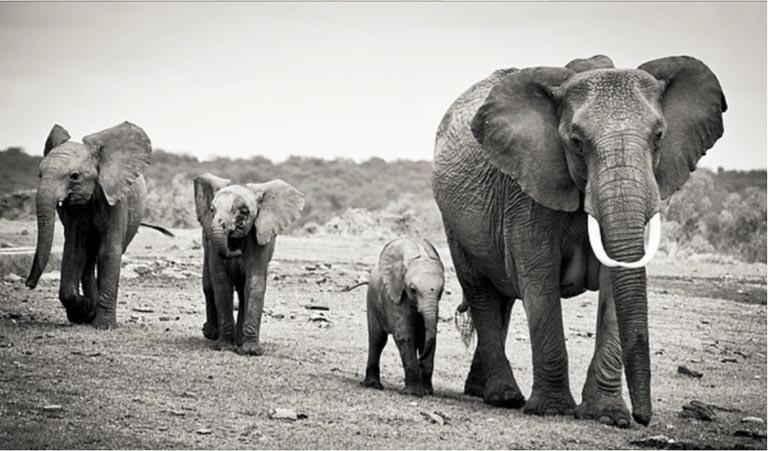 I myself have had similar experiences in India, people in my social circle tend to focus upon everything great that happens in my amazing country; but they often forget that we are not the majority. After Andreas’ talk I couldn’t help wonder, what the world would look like, if we could really “see” and understand everyone.

We also reflected on the fact that all of us, in every project/enterprise are working with “blind” people. The crucial part to recognize is that, as in the case of Andreas, those who are blind are not just the ones that need help to see.