Building relationships – how engaging with community leaders over time can deepen what otherwise would be fleeting impact. – Post by Geraldine Hepp

In this series we will look at 3 examples of how continued community engagement can create a deeper impact even though it also includes foreigners interacting with locals over a relatively short time-span:

Amplifying reach and impact – Josphat Macharia, Sustainable Agriculture
As part of our professional skills course in Bio-Empathy, Amani Institute Fellows in Kenya visit Josphat Macharia’s farm that is centered around sustainable agriculture innovations he has been experimenting with for decades – inspired by his mother’s farming techniques to permaculture principles he discovered way later to correlate with his insights as well. During dry season his farm is the only green farm in his area due to his smart co-planting, fertilizer and water retainer methods. His ambition to spread his work is met by resistance in the community but step by step he is building a network of people replicating his work.

Over the course of 6 classes since 2013 we have built a relationship with Josphat that spurred independent initiatives amongst our Fellows that reaches way beyond the income this visit brings to his farm and the inspiration he has given to more than 72 changemakers from around the world. 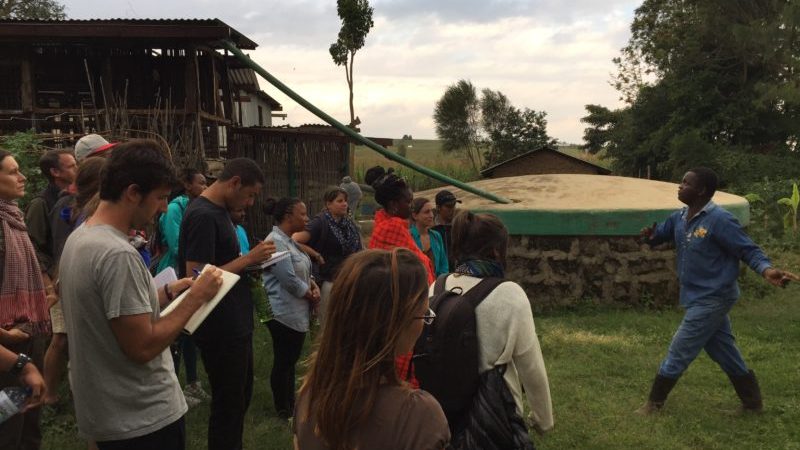 After our first visit to Josphat’s farm, Fellows chose his challenge of community outreach as their case-study in our Bio-empathy course and shared their ideas with him – however, in 2014 a team of Fellows took this relationship further and developed a website for his project Ndabibi Environment and Maria Garrigues Munoz brought his farming methods to her apprenticeship host, Gatoto Primary school (which is headed also by an Amani Alumni, Betty Nyahoga). In 2015 Alanna Sousa collaborated with Josphat to bring Liter of Light to his farm and community.

Lesson learned: Relationship baseline matters
While Fellows come and go and have varying degrees of depth in their extended interaction and collaboration with Josphat, our continued collaboration that is in its foundation an educational exchange, creates a baseline allowing for deeper impact to build over the years – both for enriching his project as well for the value our Fellows get out of this field trip.