The Best of Times? Reflecting on a Turbulent Year for Changemakers – Amani Institute

The Best of Times? Reflecting on a Turbulent Year for Changemakers 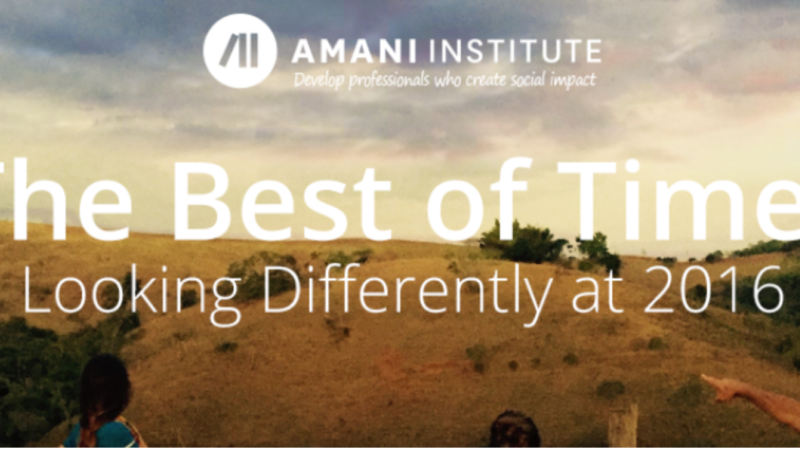 This is an article written by our co-founder and CEO Roshan Paul. Please read the full article on LinkedIn.

Are we living in the ‘worst of times’? As end-of-year analyses proliferate, there is a genuine wondering if 2016 has been humanity’s worst year in the lifetime of anyone under 35. A year that started with Zika mosquitoes putting the Olympics in doubt showed no let up in terrorist attacks and mass shootings, all unfairly blamed on refugees. And then came the twin shocks of Brexit and Trump that highlighted just how wide has grown the generational divide between young and old, and between urban and rural. If cities and youth are the future, as many believe, then David Cameron and Hillary Clinton would be toasting to the new year together.

But no. In 2016, the reins of progress were yanked back, hard, showing just how much work we have to do. We don’t even know if the news is real anymore (and there’s much news we wish was fake). There is indeed a good argument for the worst of times.

And yet. We also see evidence that this is the ‘best of times’. On some of the hardest problems – poverty, health, literacy – our species has never had it this good.

We firmly believe that one reason for this progress is the rise of “changemakers” – all around the world, people are consciously choosing to do work that matters.

This prioritization of psychological needs (contribution, fulfillment, self-actualization) over material needs (more money, cars, houses) is a massive shift in human priorities. Such a shift is harder to write headlines about, but we see it everyday at Amani Institute.