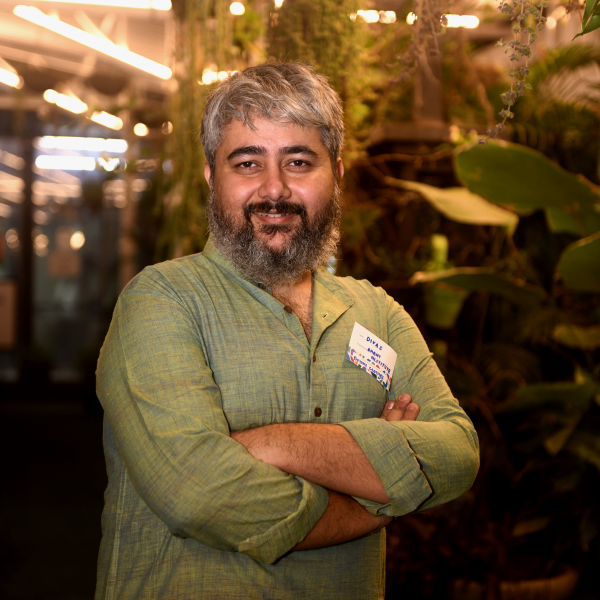 Divas grew up in the largest Indian state of Uttar Pradesh. He completed his schooling across many small towns and cities in the state and lived with people from diverse backgrounds. "Having been raised by his mother since he was eight, this helped shape his view on the struggles of a single mother in a conventional, male dominated patriarchal society. It inspired him to build his understanding of other kinds of marginalization and vulnerabilities faced by individuals and communities.

He had a stressful time at school and college. It made him anxious with the content, methodology and delivery Indian schooling/education system had to offer. Inspired by Mark Twain's quote, "never let your school interfere with your education" he moved out of college to pursue learning. His entry into the impact sector was experimental but the subsequent roles were carefully chosen and set the foundation of his work.

For the last ten years, he has worked at Youth Alliance, Safai Karmachari Andolan and The Purpose Foundation focused on facilitation and training, partnerships, communications and advocacy around issues like youth leadership, human rights and livelihoods. His wide range of experience ranges from community-based grassroots socio-political movements to global nonprofits and think-tanks.

He has also consulted with prominent impact organizations like American India Foundation, Tata Trusts and Anandwan. Divas has joined Amani Institute's India team as a Program Manager where he will be responsible for designing and delivering high quality programs to our clients and partners.

Divas is an Acumen fellow, Democracy fellow, and Create to Inspire fellow. He has studied English Literature from Delhi University. Besides designing learning journeys at Amani Institute, he can be found cooking, reading current affairs, and going on long drives. He currently lives in Aligarh, 100 miles away from the national capital of New Delhi with his mother, grandmother and pet dog, Iqbal.