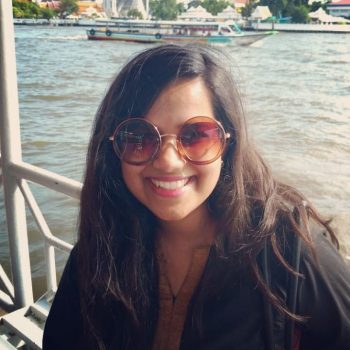 Vishnupriya is a social justice warrior, lawyer, and a sucker for a good sangria from New Delhi, India. She is passionate about helping businesses scale and is keen to utilise her experience to create meaningful impact. Vishnu is a law graduate (B.A-LLB) from Symbiosis Law School, Pune. While at college, she headed the Human Rights Cell and was part of multiple projects. One such project was the Budhwarpeth project- protection of the rights of commercial sex workers, which involved research and fieldwork around the civil rights of commercial sex workers. Another project that she was deeply involved was a youth theatre project, which used street theatre as a medium to spread awareness about various social causes. She also conceptualised and organised ‘Not Just Popcorn’, a film festival to raise funds for these projects. Following her graduation from law school in 2013, she joined the offices of ex-Additional Solicitor General of India – Mr. Parag Tripathi, as she wanted to understand at a ground level how the judiciary functioned. Thereafter, she joined a corporate-commercial law firm, GameChanger Law Advisors (GLA), as a founding member. At GLA, she worked extensively with startups and venture capital funds, led investment transactions, and provided corporate advisory. She was also deeply involved in business development, channel partnerships, speaking at and participating in events and workshops, hiring, and framing internal policies. Vishnu has also worked as a consultant with the Indian Institute of Management, Ahmedabad on a project to create metrics to evaluate the inclusivity of social enterprises. She is passionate about music, theatre, and painting, and loves enabling social change through these mediums.