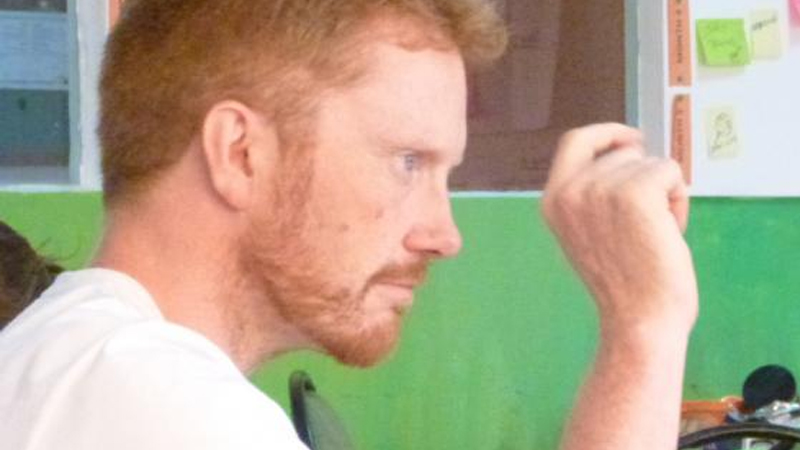 This is a post written by our current Fellow Mriganka Lulla who is working in the same organization for her apprenticeship as Andy did while studying with Amani Institute.

The Maasai Mara is representative of different things to different people. For most people it brings to mind Kenya’s iconic tribe, colorful beaded jewelry, the Big Five during migration, and so much more. For others, the association is not as obvious.

Meet Andy McBride, founder of Amzuri, a coaching and leadership development organization based in Belfast, and a proud alumnus of The Amani Institute’s ‘14 Nairobi cohort.

“Most of my Nairobi anecdotes are not fit for public consumption”, said Andy, laughing ruefully, when asked to share stories of his time at Amani. “But”, he mused, “I do remember when an entire container of strawberry yogurt exploded on me, during the very unsteady bus ride to Maasai Mara for our ‘Systems Change’ class. I can still recall, most vividly, that strawberry yogurt…”

And isn’t it exactly this creative pairing of existing ideas, concepts and notions – strawberry yogurt and the Maasai – that makes for successful innovation?

“It is not necessary to push for innovation for the sake of it, or for your ego. Instead, it is about what will work to solve a problem, and getting the execution right” Andy is a man of many facets. In his life before Amani, he was a business consultant with big corporates like Deloitte and Accenture.  He also played hockey internationally.

“I traveled a lot – Peru, Bolivia, Namibia – and always wanted to work in the humanitarian sphere. I made it a point to take out a couple of weeks from my travels to volunteer with different development projects. It was when I took two weeks off my holiday to volunteer in Kampala that I got interested in organizations that were not working solely as charities.” Thus began his exploration of social enterprise.

So, what was Amani all about, then?

Through the course of his Masters in Psychosocial Humanitarian Consultation, Andy began doing more reading around health inequality, in particular, in informal settlements. A Google search led him to Amani’s co-founders Roshan Paul and Ilaina Rabbat – before their first cohort had launched. One year and a deferral later, the Amani Institute welcomed Andy.

“Amani’s biggest takeaway for me was to just go do it. They inspired me to take action.”

Placed at Access Afya, a chain of micro-clinics delivering primary healthcare services to communities on the ground in Nairobi’s informal settlements, where he would later transition into the position of COO, Andy took the lead on designing and piloting their “Healthy Schools” program. ”It is all-consuming- and you got to be ready for that. You will be tested in every single way – in terms of putting together your strategy, talking to your staff, being on a Skype call with an expert from another country and talking to a mother whose baby is sick – sometimes all in the same afternoon.”

Influenced most by his design thinking class at Amani, he was able to incorporate skills he learned in the classroom into his apprenticeship.  It was the ‘production of a prototype’ that pushed him to have a ‘Healthy Schools” prototype ready on paper and digitally, to show to parents and receive their input and suggestions with regard to the design. “It was one of my biggest challenges: to prototype something that wasn’t perfectly designed yet. But Access Afya is all about the speed of trying things- getting out there and getting the support of people.”

All about the people:

Amani’s ‘Systems Change’ class allowed him to build confidence when working with a group, and cemented his understanding and ability to pull together different elements across sectors, functions and individuals. Seeing  “Healthy Schools” kick off, and witnessing primary school children being screened preventively as well as receiving a mid-morning porridge at school, was incredibly exhilarating for Andy. But above all else, he reveled in the combination of being able to talk to people by the clinic, and the opportunity to move in an environment that allowed him to better understand the everyday people and their everyday concerns.

“I got an immense buzz from being able to understand people. I often made jokes about my poor Swahili proficiency, ‘Kiswahili Kidogo Sana’ (little Swahili, please), but I was good at making people feel comfortable and said hello to everyone.”  He understood that many of the people he encountered in Nairobi’s informal settlements did have the money to pay for quality services – especially health – that was of importance to them. This was particularly true when these services were delivered by organizations that they perceived to have their best interests at heart.

Asking people what they wanted to do in the future offered incredible insight to Andy, who realized that what the sugarcane seller he spoke to frequently really wanted was to buy a truck. “People are aspirational and you need to hear them out, instead of thinking that they have so many problems.”

Andy has remained passionate about people even after moving back to Belfast, where he now works to help individuals realize their potential in the leadership and creative space.

Life post-Amani has indeed been a transition for Andy, who had to actively work to avoid getting sucked back into the various distractions posed by family, friends and his old way of life.

“I urge the current batch of Amani students, and all Amani students going forward, to think of themselves as a group of people that can stick together and actually create something, more than just staying in touch as friends – start thinking early what you can build as a collective rather than as individuals”

And create is something Andy wants to prioritize as he establishes Amzuri. At the crux of what he gained from his time in Nairobi, was a global support base of like-minded individuals who shared in his journey with him, and the understanding that he has both the desire and ability to connect more deeply with people, and fuel behavior change.

“Welcome the problems and the difficult times, and somehow – even if it is by having other people helping you – keep believing in yourself.  Oh, and while you’re at it, have fun!”

Life does offer bumps, twists and jerks along the way. At some point we have all been on that unpaved road to the Maasai Mara. And if we’re lucky, the uncertainty of the road will always remind us most vividly of strawberries.