The Path to Racial Equity in Brazil 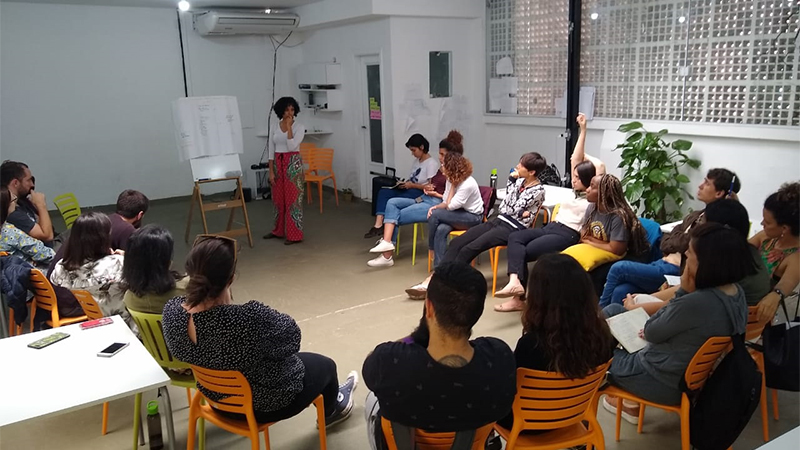 For nearly four years now , I have been very interested in the topic of social innovation. As a cultural manager, creativity always presents itself as a key element to deal with the unexpected and diverse aspects of life.
Culture to me is not only a space for artistic expression but also a bridge between worlds. I started to see my professional field – cultural management – as this place to build meaning and to define ourselves as a society and to promote the changes that I believed in and that I saw as a request or a wish from those communities and actors that worked with. This was when I realized that cultural practices were the most “fertile soil” to grow those new tools and methods discovered during my initial research on the social field titled “collaboration and community feelings as a way to make an impact.”

From that moment on, I made the decision that I wanted to specialize in social innovation so I would be able to create better solutions to the social issues that I saw. I decided to apply for the Amani Institute Post-Graduate Certification in Social Innovation Management (SIM) just before the application deadline lapsed and was accepted to join the July 2019 class in Brazil.
With an unique methodology that leads us to prototype interventions and innovations that positively impact society, Amani Institute gave me lots of new tools for social innovation, the expertise to use them, a platform for introspection and a very welcoming network. Even more importantly, during the SIM program I learnt about the relevance of social innovation in solving complex 21st century challenges and how to think creatively about solving the many problems affecting Brazilians.

Being one of the few black women in the SIM Class (and pretty much at all institutional places that I have been my entire life) I finally saw how unique my perspective of social matters can be. Being an Amani Fellow illustrated how important it is that we have more diversity in decision making processes, especially if we really wish for a new era with better connections between people, more collaboration and sustainability. So, being the only one is not a bearable situation anymore. Not for me and not for the world if we intend to flourish as society. We need more representation of all ethnicities in society.

Today in Brazil, black people are 2.7 more times likely to be murdered than non-black people. Between 2016 and 2018, the rate of illiteracy for Afro-Brazilians decreased from 9.8% to 9.1%, but the same rate for white Brazilians it is only 3.9%. Among black people from 18 to 24 years old, 4.9% still are at elementary school and 29.6% at high school, a much higher rate compared to white Brazilians.

Despite Afro-Brazilians being the majority ethnic group in society, they only occupy a third of the spots in the Brazilian Federal Congress. In organizations, less than 30% of the executives’ spots are managed by black people, white ones occupy almost 70% of those spots. And, if we look closer only for the data from the 500 biggest companies this rate of participation in management positions decreased to less than 7%. *

All of that made me wonder: can the Brazilian social innovation field be effective without addressing the racial equity challenge? Is it really possible to tackle social structures issues and not move ourselves from the standard status of privileges? Or  can we ask an even tougher question: why waste all the ancestral, beautiful and wise knowledge by keeping ourselves attached to this sneakily racist way of leading that marginalizes a majority of the country? These concerns guided me through the almost nine months journey of intensive classes, activities, presentations, group dynamics, templates, quizzes and also transformed me into a restless Afro-Brazilian that will not be content as the only in the room one anymore. So, I insisted with my questions: how is it possible to provide a better social structure and investments that build positive changes without a full representation in roles of power and decision making?

Social innovation is a transversal strategy that recognizes that the solutions we are looking for mostly arises from the active collaboration of constituents across government, business, and the nonprofit world. With this in mind, I firmly believe that having candid conversations on racial equity in Brazil and taking actions or equity is a priority. Because there’s no other more transversal and inter-sectional issue than this. In Brazil, by talking about structural racism we implicitly tackle education, gender, hunger, poverty, urban infrastructure, entrepreneurship,sanitation,employment among other social matters.

Revisiting the effects of slavery in Brazilian society can be painful and shameful, but it could also be an opportunity to (re) discover and take back all the knowledge that we devalue. By reviewing modern history, we came to our knowledge an estimated number of 36,000 trips to America made by slave ships. In Brazil, it represents approximately 4.8 million Africans who were brought to be slaves. Our country was the one that “imported” the biggest number of Africans and the only one that even after independence maintained the slavery traffic as an official trade. ** It lasted for three centuries (from 1550 until 1850). The abolition happened in 1888, only 132 years ago. And that means that my great grandparents may have been born as slaves, only three generations before me. Nevertheless, the end of formal slavery did not mean proper inclusion of Black Brazilians as equal participants in society. In fact, we had (and still have) a mindset, a lack of public recognition and even laws that deprived the afro-brazilians black ones from the minimum of opportunities and structure to fend for themselves.

All of that data and information deserves an article itself, but we can clearly see how the recent history of slavery and a consequent system of privileges shapes (back then and still now) Brazilian society in fundamental social-economics matters. So, from my perspective, in order to dream about innovation and a more just, equitable and peaceful Brazil – we should reconnect and honor that lost black intelligence. I don’t have any magical solutions, and we shouldn’t look for one. As I believe (and as Amani showed me), innovation comes mostly from the capacity of re-frame things; so I decided to look up the racial equity challenge from the abudancy perspective and prototype the Ubuntu Cuidadoria*** – a framework of services designed to co-create better solutions on racial equity and diversity. My vision is to increase the participation of black people, especially women, at institutional spots of power and decision making. Besides these activities – executive management, workshops, facilitation process – I am testing a four step program addressed to organizations that are willing to improve their initiatives around racial equity agenda. By the end of the year, the first iteration of the program will be implemented.

Looking back on all that I’ve lived during the Amani experience, it remains the certainty that I am not alone, I belong to a powerful and engaged network determined to build together the kind of society where we can, in all meanings, thrive. Like Ubuntu’s philosophy teaches us: I am because we are!

*Data extract from the paper “https://biblioteca.ibge.gov.br/visualizacao/livros/liv101681_informativo.pdf
**SCHWARCZ, Lilia Moritz e GOMES, Flávio dos Santos. Dicionário da Escravidão e liberdade: 50 textos críticos. São Paulo: Companhia das Letras, 2018.
***Ubuntu is a popular and traditional expression from zulu language whose meaning is “i am because we are”. Cuidadoria is a neologism from Portuguese that express the action of take care. It is also an analogy with the function of “curation”.